For decades, Colombia’s internal armed conflict halted rural development across the country. Travel to remote rural towns was dangerous and, due to lack of infrastructure, sometimes even impossible. Drug traffickers, one of the main drivers of the conflict, encouraged farmers in these regions to switch their crops to the illegal yet highly profitable coca plant—the main ingredient in cocaine. For farmers in areas where arriving by road is a multi-day journey, where plumbing and electricity are promised but never arrive, a crop like coca presents a ladder out of poverty.

With the start of Plan Colombia’s illegal crop substitution programs in 1999 and the signing of the Peace Agreement in 2016, however, many of these rural producers saw a new opportunity. For farmers in Caquetá, Guaviare and Putumayo—where 55 percent of people live in poverty (less than 3 USD per day) and 21 percent live in extreme poverty (less than 1,5 USD per day) —new demand for the cultivation of local exotic fruits offered a beacon of hope.

Selva Nevada, a social enterprise founded by Catalina and Alejandro Álvarez, offers these small producers an additional source of income by connecting them to national markets. The company produces high-quality artisanal ice creams made with exotic Colombian fruits sourced from rural communities in conflict-affected areas. Previously lost to the soil, these fruits are now an additional, stable, legal source of income for 100 farmers.

A Region Rich in Biodiversity

Although one of the largest regions, The Colombian Amazon is among the least populated in Colombia due to its rainforest full of exotic fruits such as açai, arazá, copoazú and camu camu—names that, until recently, were unknown to Colombia’s urban residents. Thanks to companies like Selva Nevada, this is starting to change as Colombia’s urbanites come to learn about the richness of their country’s rural areas through food. “I believe that Colombia has a great opportunity to promote economic growth in rural areas, always considering the balanced and sustainable use of biodiversity. The most vulnerable communities in the country live in areas that have high biodiversity and their situation could be improve if we find a way to generate economic benefits while protecting forests, ecosystems and natural resources,” says Alejandro.

Working with hard-to-reach, rural communities is hard, however the key for Catalina and Alejandro has been working with grassroot organizations. After years of working on international cooperation projects in the public sector, they saw that many programs, although benefiting communities in the short term, weren’t sustainable for the long term. This moved them to take a long-range approach, built on relationships of trust. “Our relationship is different, instead of being beneficiaries of a project where there is an unequal relationship between who provides the implementation and the people of the region, we believe it’s better to have an equitable relationship, where we are partners, we both take risks, and we both are impacted in profits and losses,” says Catalina. 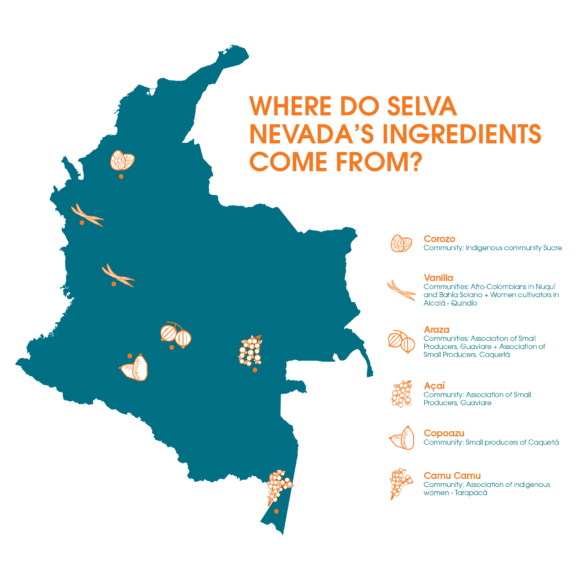 The increase in the average net income for small farmers working with Selva Nevada is estimated at 26 percent, something that fills Alejandro and Catalina with pride. Ferney, a farmer growing copoazú in Caquetá, has become an example in the area for other families: “I’m proud of what we have done, but they give me more pride. It makes me feel happy the work they do and the decisions they have made,” says Catalina.

Over the last 12 years, Selva Nevada has built a brand of artisanal ice cream that has earned recognition not only for its quality and flavors, but also for its goodwill, showcasing the origin of the fruits and the communities that produce them.

The company’s mission is to become a major artisanal ice cream and start creating other natural products made with exotic fruits from Colombia. With its inclusive and ethical business model, the company aims to create a bridge between Colombia’s rural and urban areas—raising incomes in conflict-affected areas and encouraging cities to learn about and appreciate their country’s biodiversity.

“I wish that most Colombians could identify a copoazú as easily as we identify a blackberry or strawberry, and that we are proud to see our wealth in the diversity of the country mentioned in the news,” says Catalina. “I dream that all Colombians will understand, not only in speech but also by taking action, the wealth that we have in our natural resources and begin to protect our environmental and cultural diversity,” Alejandro concludes.

Selva Nevada is part of the investment portfolio of Acumen and the Investing for Peace Fund of the US Agency for International Development (USAID). This social impact fund seeks to invest in companies that develop business models to fight against poverty, especially in areas affected by the conflict in Colombia.

To Stop Child Labor, the Cocoa Industry Must Tackle Systemic Issues of Poverty

Doubling Down on Mini-Grids: A Call to Action