This Acumen Fellow lost her job when she got pregnant. Here's how she responded. - Acumen

This Acumen Fellow lost her job when she got pregnant. Here’s how she responded.

Imagine that you’ve spent half your life training to be a doctor. You pushed yourself throughout medical school, you passed the brutal exams, you started treating patients and changing lives­­ — and then, in the blink of an eye, it’s over. Why? All because you’re a woman who wants a rewarding career and a family.

In Pakistan, that situation is all too familiar for female doctors. Though women outnumber men in the country’s medical schools, more than half never end up practicing after graduation day because they are forced to give up their professional aspirations to appease their husbands and conservative in-laws. For many families, having a daughter-in law, or bahu, who is a doctor can be a status symbol but, behind closed doors, they insist that wives devote their time to their husbands and children.

Seeing some of the country’s brightest doctors sitting at home while nearly half of Pakistan’s population lacked access to health care didn’t make sense to Acumen Fellow Sara Saeed Khurram. Born to an upper-middle class family in Karachi, Sara always knew she would become a doctor. Her father had decided long before she was born, but Sara was happy to fulfill his dream. She was also well aware of the challenges facing women in the field. As she worked toward her degree, she wondered, “Am I studying to be a doctor? Am I going to work as one? Or is it just a label that’s going to make me more desirable for a marriage proposal?” 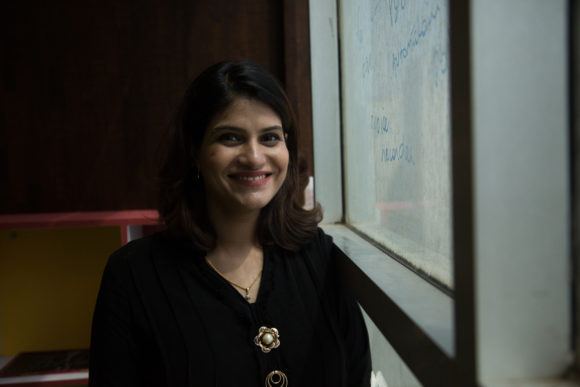 Sara Khurram is the Founder of an all-female health network, Sehat Kahani.

She eventually earned her Bachelor of Medicine and Bachelor of Surgery from the prestigious Dow University of Health Sciences, then became a resident in radiology. But after working a few years, she got married and became pregnant — and soon after was asked to resign. “They told me that I had to leave because the radiation would hurt the baby and they didn’t have a program that would allow a pregnant female to come back into the workforce. They didn’t do anything ‘illegal’ but I was losing out on my career.”

Being forced to give up her life as doctor was hard enough, but Sara also struggled with becoming a mother. She battled postpartum depression and then a miscarriage. It was during these darker months that Sara started to think about women who didn’t have access to the type of care she had and the highly skilled doctors, like herself, stuck at home instead of helping others. In Pakistan, only about 28 percent of women receive prenatal care and just 38 percent get access to postpartum care. Forty percent deliver at home, significantly increasing the chances of complications.

“If you belong to an elite or upper-middle class, the options are there,” Sara said. “But as you reach the middle class, lower-income, and rural populations, you’ll find that opportunities for care are severely limited. 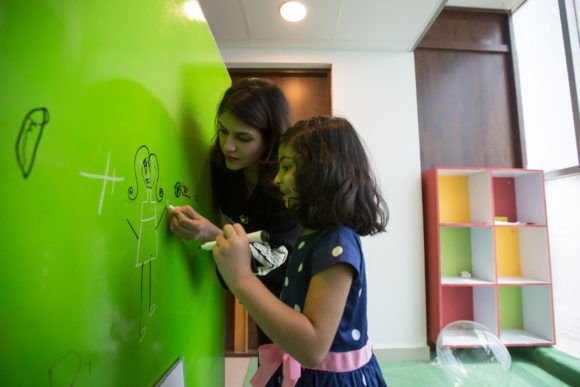 Sara takes a break from work to spend time with her daughter.

Health care is a taboo in most of Pakistan’s rural communities. Women can’t even travel to a healthcare facility on their own; they have to be dropped off by a husband or mother-in-law. They’re expected to deliver and raise children, but their health is neglected.”

There was one patient she couldn’t get out of her head. It was a woman who came in during a particularly bad monsoon season while Sara was working at Karachi’s largest public hospital early in her career. The woman was seven months pregnant with twins but had no idea.

“She was septic and had a fever,” Sara said. “She was literally green by the time she walked in. She and her husband arrived with just the clothes on their back. Their house, their livestock, everything had floated away in the floods. When I asked if she was pregnant, she just said, ‘I don’t know.’ Her knowledge of health care was so limited that she had no idea about her pregnancy.

When we opened her, there were two completely maculated babies that had been dead for two months inside her. She’d lost them at five months and had no idea. That’s when I realized she’d come from a place where she didn’t have a single healthcare provider to tell her that she was pregnant. She died two hours later from sepsis.”

Sara found herself at a turning point, personally and professionally. She wanted to work again, but this time it would be on her terms.

And so began Sara’s journey to create Sehat Kahani.

Sehat Kahani — which translates to “story of health” in Urdu — is a social enterprise that helps women doctors provide affordable health care to underserved communities across Pakistan. The company runs small clinics where a visit is much like any other trip to the doctor’s office—except the doctor communicates via a computer screen. Through online consultations, video conferences and information sharing, low-income patients gain access to high-quality care and nurses are on hand to record medical history and perform simple examinations. It’s cutting-edge health care delivered through the power of technology.

“I went in with the vision that the community should be empowered to understand healthcare issues,” Sara said. “We need to educate and advocate for them, and then connect people to an online community of doctors that will help treat their health problems.”

Building Sehat Kahani was no easy feat in a country like Pakistan where resources are scarce and bureaucracy and cultural traditions can hinder projects from getting off the ground. And, of course, it was particularly difficult as a woman entrepreneur in a historically patriarchal society. “Often, I’m the only female in the room making a presentation,” Sara said. “I walk into the room and I get the feeling that I shouldn’t be there. But that disruption is important. Because until a female starts talking to them, how do they ever know that there are female voices to be heard?”

“No one likes to fail. No one likes rejection,” Sara said. “Rejection comes in episodes, and it comes really quickly, again and again. But if I want to throw the towel in, I go from the office to one of my communities and spend a few hours in my clinics. That gives me the inspiration to start working again.”

Today, Sehat Kahani is Pakistan’s largest telehealth company, with 14 centers serving more than 40,000 patients. Sara’s passion to build the social enterprise — and the success it has had so far — has not only given her a new confidence but also has helped her family to open their minds and rethink their traditions. Initially, they weren’t quite sure what to make of Sara’s drive to start her own company.

“With time, they saw the seriousness and the passion,” she said. “It helped when the organization started winning awards and my work was recognized, too. Over time, they’ve changed for me. They’ve changed their mindset and their cultural values. I’m married into a very traditional family, where females stay at home and take care of the kids. A woman traveling into communities or at night on her own was something completely unheard of. But they adapted — and fast. They’ve been absolutely supportive.”

As females, we’re conditioned not to speak. We’re conditioned to disguise our feelings and not let them out. It’s just so wrong. If you’re in a room and you have a vision or an idea, find people who will support it and then just go for it. People are going to question you. There are going to be barriers. But if you take each day at a time, there are solutions that can move you forward.”

The Acumen Fellowship is a leadership development program that equips emerging social leaders around the world with the skills, knowledge and moral imagination to drive change in their communities.

Applications to become an Acumen Fellow are open from August 6 to September 9, 2018. Apply here.

Here’s How You Can Become an Acumen Fellow

These 7 Acumen Fellows are the Leaders the World Needs Today